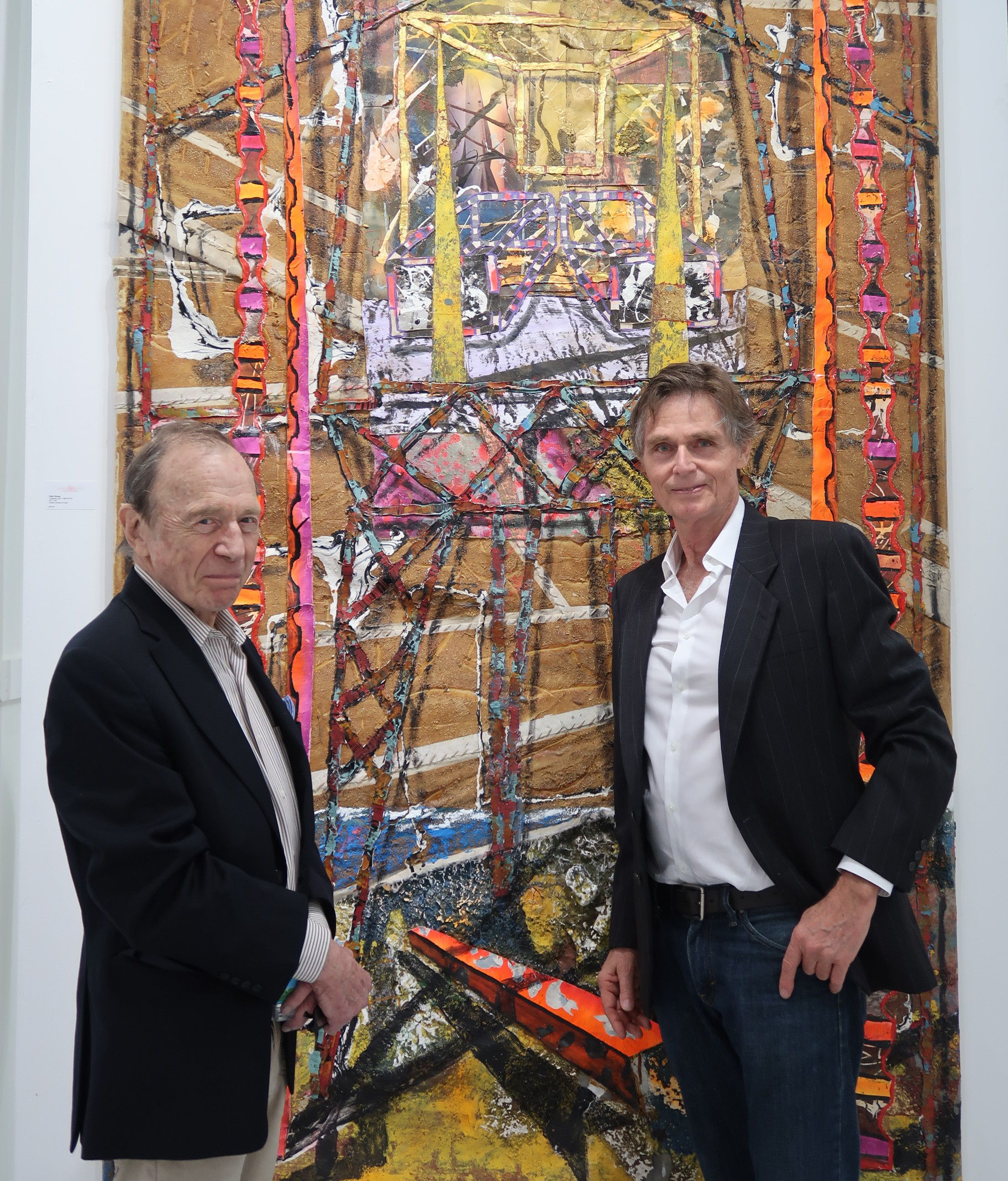 “How Reid Stowe turned a remarkable life into powerful art.”

Reid Stowe is 67 and making art has been a passion throughout his life but you could say that his career was somewhat that of an Outsider artist, in that it was a mostly private passion, alongside a second devouring passion, long-distance sailing. He sailed in two boats, both built by hand, the first when he was 20, on an inter-coastal waterway in North Carolina. For a while he financed himself by sporadically smuggling pot that he got from Columbians in boats in the Eastern Caribbean, “This was before anybody had heard of the cartels,” Stowe says. It was also, incidentally, before pot became the supercharged substance it is today.

His voyages lengthened. In 1973 Stowe made his first solo crossing of the Atlantic in his first boat, Tantra, a small catamaran. He would paint aboard, embellishing his marine charts with images of goddesses . “I was painting for my protection,” he says. The sailing became a sequence of challenges. “In 1986 I was in New Zealand preparing to go to Antarctica, and thinking about what I was going to do next,” he says. “That was when I decided upon 1000 Days At Sea”.

Stowe took eight people, male and female, to the Antarctic. So when he learned that NASA had long-range plans to take eight people to Mars, he wrote a paper about the parallels between long- distance ocean voyages and those in a space capsule and gave some talks. This came the attention of NASA and he began having interactions with the space community. But then he was busted by the DEA in New York, was sentenced to a year and NASA vamoosed. Upon his release the 1000 Days grew into an actual working project. On April 21st, 2017, Reid Stowe and Soanya Ahmad, his paramour, set sail from Hoboken in Schooner Anne, his second boat built when he was 25. He is now the world champion long distance sailor, after spending 1152 days out of sight of land. And his art has grown directly out of that life.

Soanya Ahmad learned she was pregnant but was utterly insistent that her husband continue. Stowe arranged that she be picked up eleven miles off Australia by the holder of then long-distance sailing record, Jon Sanders. That was Day 306. He sailed on beneath the Australian coast, heading for the Pacific. Individual artworks in the show tell stories, some chilling. On the 657th day, for instance, which eerily was precisely the length of the Jon Sanders record sail, Schooner Anne was capsized by a rogue wave while he was rounding Cape Horn. Stowe was knocked out but the boat righted herself, thanks to a heavy metal keel, and he was brought to by a gush of icy water.

“I saw that the sail I had spent hours hand-sewing was in tatters,” he says. “And I instantly thought I’ll make a great painting out of that.” He began painting the Capsize Painting, a five by seven footer, on usable areas of the sail, as be continued on the trip. The canvas includes the grommets and rope, collaged mounds of sawdust from boat repairs, along with biographical stuff ripped from

Stowe’s recent life, such as papers that derive from space conferences he had attended during the flirtation with NASA.

The title of a central piece in the show both tells the story of its making and indicates the length of that story. The Whale GPS Chart Painting. 1964-2019, mixes abstraction, assemblages and collaged diaristic material which includes the painting 12 year old Stowe presciently made of somebody sailing a junk when he was twelve, the chart used on that solitary crossing of the Atlantic in 1973 and the self-portrait made at the Equator during that trip. Stowe had always seen elements of performance in his voyages, indeed had made photographs of himself, dancing aboard in a dragon mask and it was thinking about such past art as Robert Smithson’s Spiral Jetty, the Nazca lines in Peru, Gordon Matta-Clark’s sliced buildings and Richard Long’s walks that made him decide to use his schooner as an art-making tool. Two of the collage elements are charts recording a formal invention of Stowe’s: GPS art.

Stowe made The Odyssey of the Sea Turtle, his first piece, in the South Atlantic in 2008, intending a voyage that would outline a turtle. “It was contingent on my understanding the winds and the currents,” he says. The usual sailing problems he had to contend with included vigorously contrary winds when he reached the bottom of the shell in the middle of the South Atlantic. “I ended up not drawing the flippers at the bottom,” he says. “So now it’s the sea turtle hatching out of the shell.” The circumference of the turtle piece was 2,500 miles and the voyage generated a story in the Associated Press.

Reid’s second, more ambitious venture into GPS art-making, The Whale, required a two month voyage and the generated art was 5,000 miles in circumference. These charts are dominant collage elements in the piece and the Thousand Day Sail – actually it was on June 17, 2010, which was the 1,152ndday – which ended with Stowe disembarking on Manhattan’s West Side, and being greeted by Soanya and his two year old son, Darshen – is memorialized by a collaged The New York Post cover, jauntily trumpeting LAND HO, BABY! onto a painting, which has become a triumphant morphing of a remarkable American life into a powerful work of art.

In December 2013 Stowe moored Schooner Anne on the Cape Fear River, North Carolina, for the last time and has been devoting himself fulltime to making art ever since. Just sometimes he is tugged back into the past though, as last September when Dorian, a mega-hurricane was heading directly towards his anchorage. “I made a painting,” he says. ”Every day I collaged a weather map on it and drew arrows pushing it out to sea. I painted a real big SOS on it. The hurricane moved out to sea and the boat rode it out okay.” There are five big THANK YOUs painted on Moving Hurricane Dorian. That canvas, of course, is in the show too.